Double Haven is perhaps one of the most beautiful areas of Hong Kong. Located in the far north east of the New Territories, the geopark's three larger islands - Double Island, Crescent Island and Crooked Island are all swimmable with minimum distances of approximately 100m, 200m and 400m. The challenges with this hike are plenty, from overgrown trails and rough coasteering to lack of water sources and crossing busy channels avoiding speedboats and ferries. This is a difficult two day thru-hike that requires a fair amount of preparation. A dry-bag is essential, the contents of which will have to be kept to the bare minimum. A restaurant stop will allow you to keep food weight down and a hammock and mosquito net will see you through the night. Aside from that, some basic first aid, a water filter, change of clothes, some snacks, a headtorch and a map is pretty much your lot. The last ferry from Kat O on Crooked Island runs at 3.30pm on Saturdays, Sundays and public holidays, if you miss this you may well have a 4th swim on your hands. Good luck on this one, you're going to get wet.

Day 1. Brides Pool Road to Wong Wan Chau (Double Island). 15.8km.
We started this on Pat Sin Leng Nature Trail from Bride's Pool Rd. We came off the trail onto Wong Chung Stream, a beautiful stretch of swimmable pools and gorgeous waterfalls which got us in the mood for being wet and let us test out our kit in the water before attempting the bigger open water swims. It's a short stream section but well worth the diversion. It's one of the coolest stream hikes I've done in HK, with plenty of lovely pools, although was a little trickier coming down rather than going up the stream.
The stream will finish on Brides Pool Rd near where you started. Take the trail directly across the road past the village of Wu Kau Tang. Follow this trail all the way to Sam A Tsuen. It's a fairly gentle trail which is easy enough on the legs. We went to Sam A Tsuen, which is a slight diversion, to visit Fook Lee Teahouse. This is well worth the effort, the teahouse is a busy place frequented by locals for it's fantastic salt and pepper squid and other other traditional Hakka food. We had a great lunch here, and filled the tupperware with fried rice for dinner. 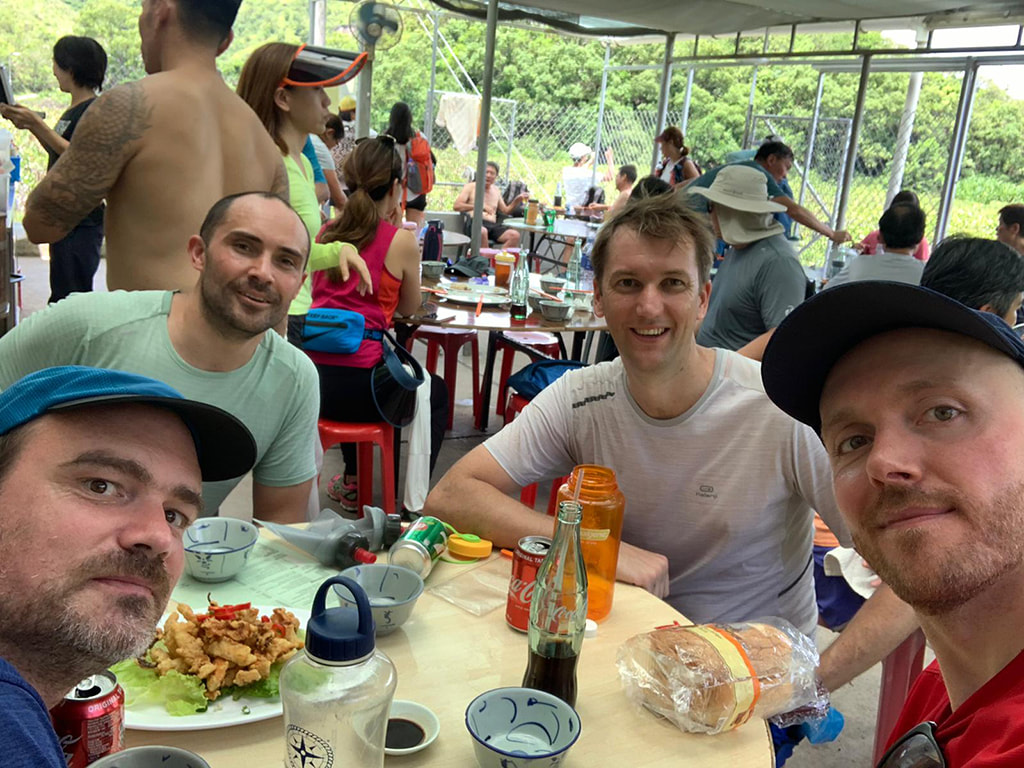 A cracking spot of lunch at the Fook Lee Teahouse in the middle of nowhere.
Walk from Sam A Tsuen to Sam A Chung which holds a campsite which could be used as a stopover, particularly if you have taken on Pat Sin Leng during this hike. After the campsite, the next part of the hike is a tough one which involves battling through an overgrown trail and spiderwebs for several kilometeres. It's far from pleasant so an alternative would be the ridge on Plover Cove country trail but that would add on some distance and elevation and would mean missing a grand lunch at the teahouse. One of our boys sustained a bad laceration to the finger on this trail. We had no first aid so we aimed for the Outward Bound Centre on Double Island as quickly as possible to see him patched up.
Your first swim on this hike is an easy and enjoyable one. At it's shortest point it's around 100 metres and there is no traffic to deal with. There is a trail which goes up over Wong Wan Sai Teng on Double Island which was our initial plan, however we needed our first aid so we took a shorter route round the coast to the Outward Bound Centre. First aid or otherwise, a trip to this outdoor recreational facility is essential on this thru-hike as there are very few water sources on the islands, you'll need a stop here to fill up. When we arrived the centre was unmanned. We got our first aid but because it was beginning to get dark we made the decision to set up our hammocks there instead of carrying on to Tung Wan beach as was planned. There was a fisherman living out to sea opposite the camp who protested at our choice of accommodation but we had no other choice due to injuries and the sun was going down. I don't recommend using the facilities at Outward Bound unless you have permission in advance, if anyone from the company is reading this, thank you very much, you saved our lives and rest assured we left no trace. 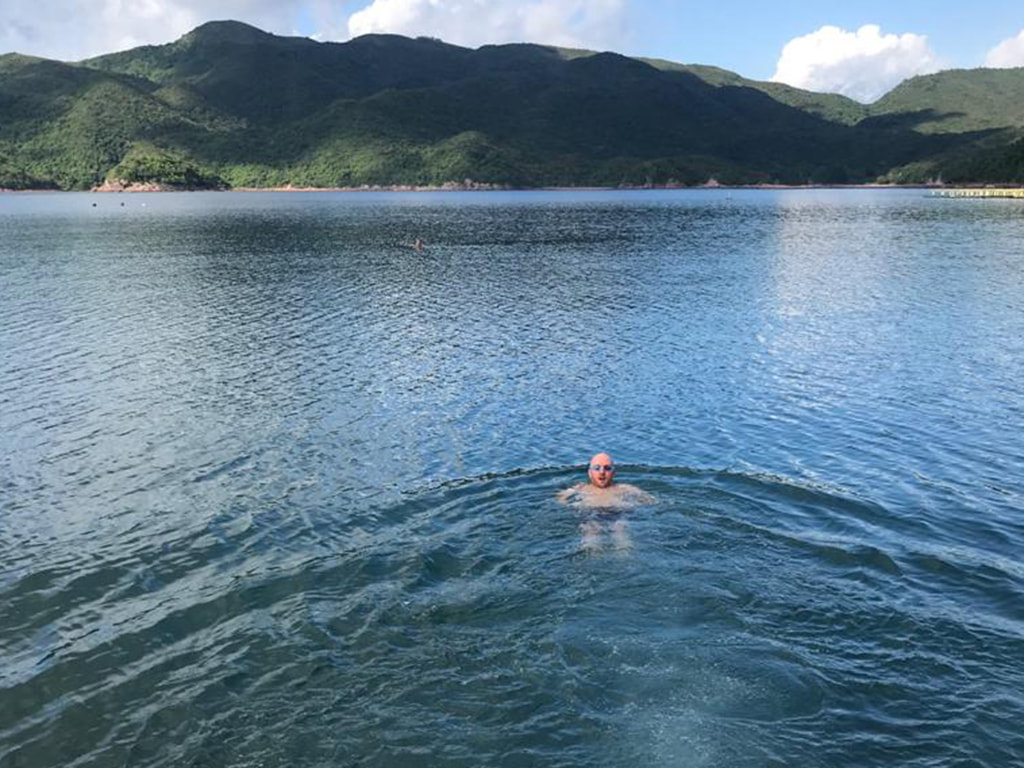 A refreshing dip in the sea before the second day of hiking.
Day 2. Double Island to Kat O Ferry pier. 8.3km.
The second day on this hike is shorter and easier than the first but involves a lot of coasteering and two swims so there is potential for mistakes to be made. After breakfast we tried to find the trail up to the ridge but it was overgrown so we decided to coasteer round to Tung Wan beach which was our original plan for accommodation. It's tough going in places and you'll need to swim parts of it if you decide on this route. Tung Wan is a lovely beach and I measured it up for hammocks, it would be possible to set up two or three in the trees along the beach. One problem would be the lack of a water source here, I didn't see one. We coasteered a little more around to the shortest distance between Double Island and Crescent Island. This swim is around 200 metres, however it's a busy channel with ferries and some very fast speedboats. Wear something brightly coloured if possible so you can be seen in the water and swim as a group to help avoid any collisions.
Crescent Island apparently has a trail, however we had little success in finding it. We did venture up a very steep and overgrown path but this was just a grave and a dead end. We got stung a few times by some huge bees trying to find the path and with water being depleted from the exertion we decided the best route would be to coasteer again to the point of our final swim. Crescent Island is a desolate place, there are no ferries here so any paths will be very overgrown so coasteering is probably the best route on this one.

When you reach the shortest distance between the two islands there is a water source here. It's kind of a well which collects water from one of the hills on Crescent Island, only drinkable if filtered but you may well need it as you will probably be low at this point. This final swim is the longest at 400m but with no traffic in this channel it's not too difficult.
When you land on Crooked Island there is a little more coasteering necessary before you hit Mun Tsan Wai. The going here is easy however to Kat O village as this is a relatively touristy island due to the ferry and it's a real pleasure having feet on concrete after those two days of coasteering and bushwacking. When we got to the village we had just about enough time for a well earnt beer and home made cuttlefish balls before the last ferry set sail at 3.30pm. A fitting end to an incredible swim hike in one of the most desolate areas of Hong Kong. 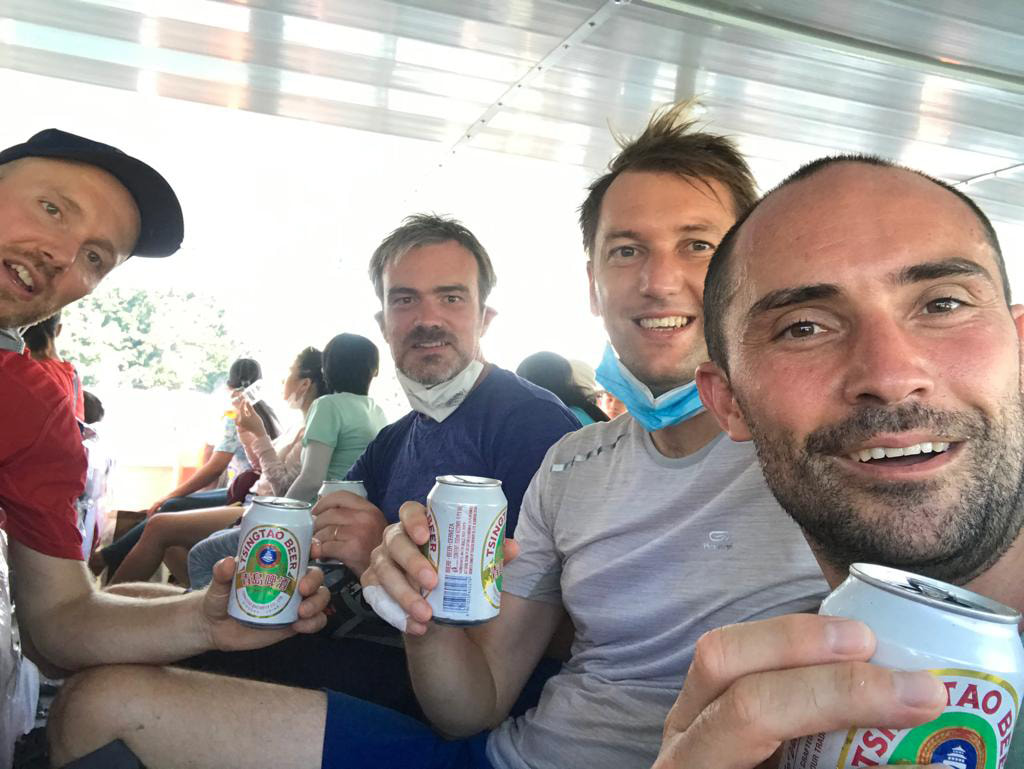 A celebratory beer at Kat O.