The Hong Kong Trail. Easily accessed but poses a conundrum for the thru-hiker. With no official campsites on Hong Kong Island you have two options. Go light and batter all 50 km in one go, or bring along a tent and rough it in a makeshift site for one night and split the hike over two days. There are three possible options to camp unofficially that I have identified. The first is a rough old picnic site, but well secluded and off the trail in Aberdeen Country Park at the end of Section 3. The second is riskier but is slap bang in the middle of the trail at Tai Tam BBQ site No.1 as Section 4 turns to 5. The final option is at a small beach at the end of Section 7 which should only be considered if you are close to death and the mere thought of scaling the Dragon’s Back at this stage makes you physically sick. We chose to hike this in one go, carrying only water and a few snacks it is definitely doable. To add a layer of endurance and difficulty we hiked overnight, the lack of sleep, an array of wild animals including plenty of snakes, boars and porpoises and extreme fatigue towards the end will be difficult to deal with, but Big Wave Bay will greet you happily at the end with food options, a beach and showers as you crawl over the line at marker H100. 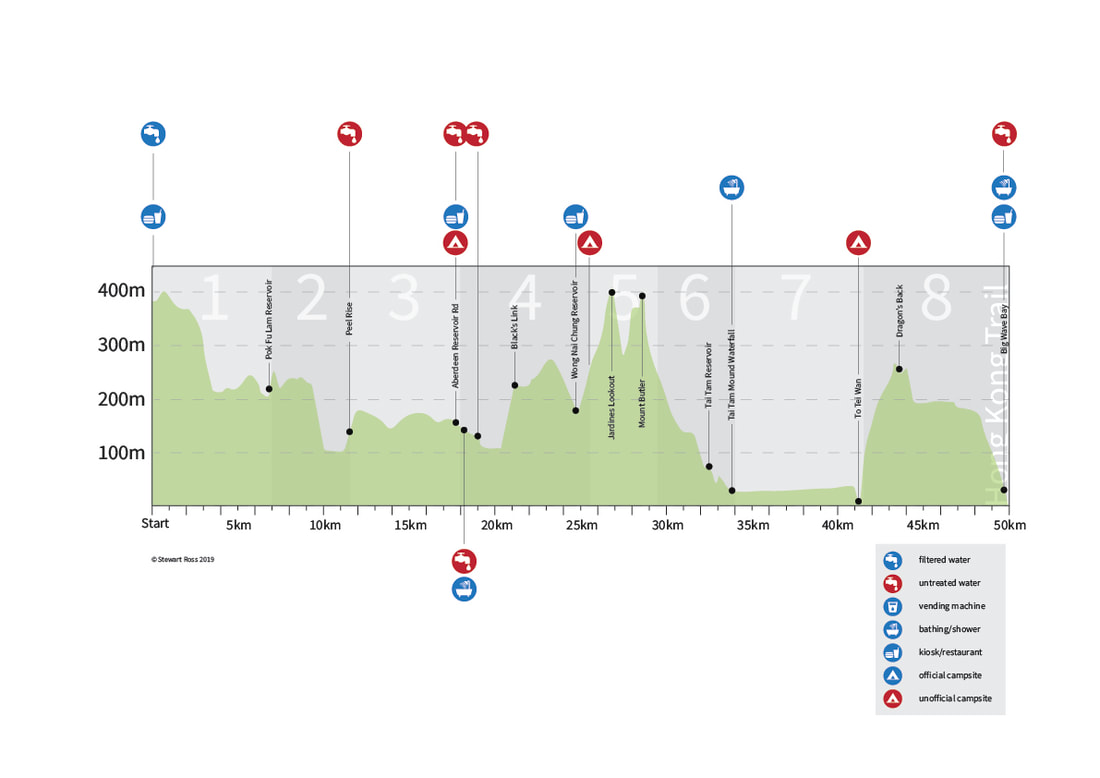 Victoria Peak to Big Wave Bay. Sections 1-8.
50km.
You’ll start high and finish low if you do this in the correct order, I see no other reason to do it the other way around, unless of course you want to add a layer of difficulty. The first few sections are straight forward. You’ll start off at the peak and traverse Lugard Road, an easy flat stretch with fantastic views across Hong Kong Island towards Kowloon. Make sure you start with full water as there isn’t much until Peel Rise behind Aberdeen on Section 2. You can fill up at the park half way along Section 1. Section 2 is straightforward but uneventful apart from a grand view of Aberdeen. Section 3 will take you into Aberdeen Country Park. Just before Section 3 turns to 4 between H037 and H038 there is a small bridge. Straight after the bridge there is a path to the left which leads down to an overgrown picnic site and pagoda. This is a possible wild camping option, albeit not a great one, but you will be secluded here and there is a small stream for a water source. It's a bit tricky to find decent ground to pitch here though, unless you use the pagoda without pegs or just sleep on a mat. A little up this concrete road is Wan Chai gap, follow the road instead of turning off onto the trail. There is filtered water available here by the play park and a kiosk for snacks. Further along Section 4 there is a stream with a small pool. Feel free to take a dip but it’s right by the trail and you may well have an audience. Section 4 becomes more difficult, in particular a long steep winding concrete path all the way up to Middle Gap Road. From here it’s back on the uneven trail then onto the concreted Black’s Link. There is a good source of water between H049 and H050 markers. This is a good place for a rest, to refill water and to contemplate the fact that you are halfway to Big Wave Bay. 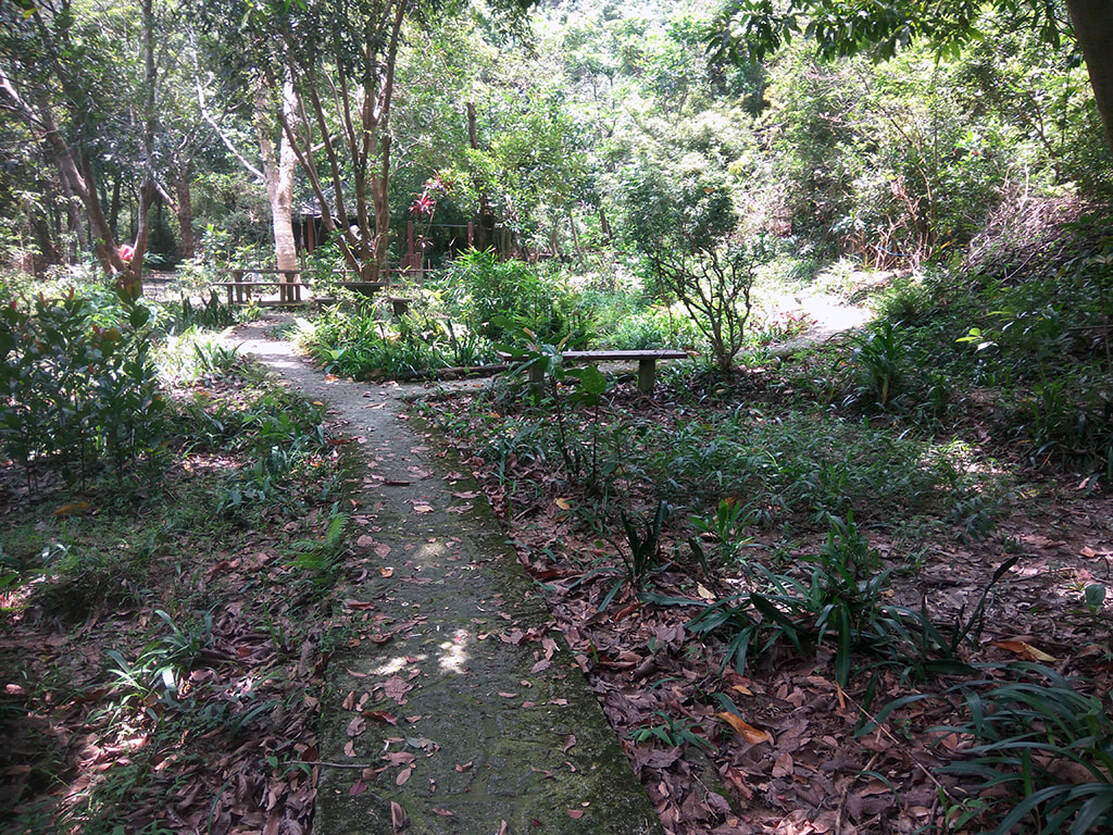 Picnic site at the end of Section 3. Possible camping option.
​Towards the end of Section 4 before the slog up Tai Tam Reservoir Road, there is a Sinopec petrol station. This is a great place to stop to buy any supplies required for the second half of the hike. I’m not sure if it’s 24 hours but it’s certainly open late as we stocked up there in the early hours of the morning. A good place for a coffee and some sugary snacks before you tackle the tough Section 5. At the end of Section 4 as you cross the small bridge to start Section 5 there is a wild camping option at Tai Tam BBQ Site No.1. I have never camped here but I think you could get away with it if you rocked up late and left early. Conveniently it’s near the middle of the hike so it probably makes the most sense in terms of a camping option out of the three I have identified. There is a small stream here, but I wouldn’t touch it as it is so close to Parkview, a large residential area. Alternatively, for a more secluded experience, take the concrete road up to the left before the BBQ site. There's an old WW2 anti-aircraft gun site up the first trail to your left. It's concreted, but a decent space if you're a military enthusiast and don't fancy the BBQ site. Section 5 is tough, it’s your first real elevation of the trail and you will feel it at this point, up and over Jardine’s Lookout, down past the Quarry then up again and over Mount Butler and down again to Quarry Gap pavilion.
Section 6 is a straightforward walk down concrete to the reservoir. You will turn off the concrete onto a path and half way along this path, around H066 there is a scramble down to Tai Tam Mound waterfall. This is the only waterfall I know of on Hong Kong island where you can swim and it’s definitely worth a look if you are in the mood for it. It does tend to get busy being on Hong Kong Island, so despite it being possible to camp there, I certainly wouldn’t recommend it. 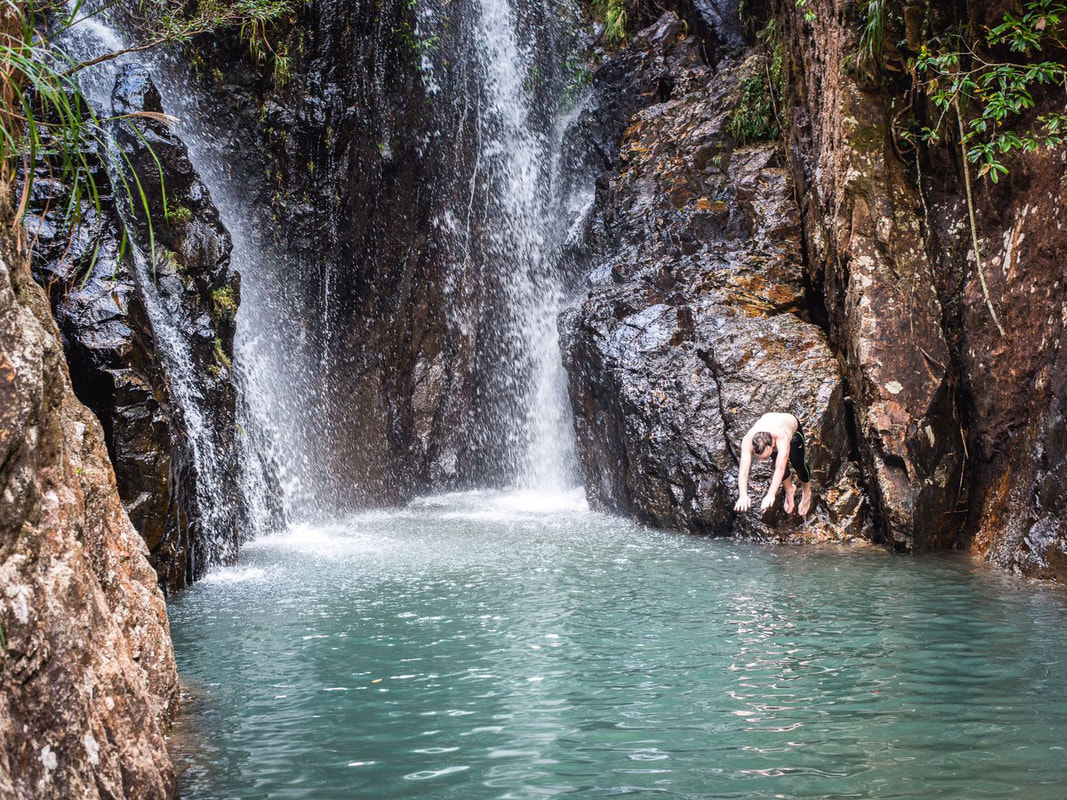 Tai Tam Mound Waterfall.
You’ll come off the path at the end of Section 6 at Tai Tam Road. Cross the road onto Section 7. When you think of the Hong Kong trail and the most difficult sections you may think of Section 8 over the Dragon’s Back, or perhaps Section 5 due to the elevation. In my opinion however, Section 7 is the toughest of the lot. On this long, flat and boring catchwater you will be pounding the same muscle groups over and over for 7.5km. If you are hiking this overnight you will be suffering from extreme tiredness, physical pain and the hallucinations will creep in, causing you to see snakes and spiders in the shadows cast by your head torch. I have hiked the HK trail overnight twice, and both times it was Section 7 that almost broke me.

​If it does break you, and there is no harm in that. At the end of Section 7 there is a small beach that you can rest or even have a sleep at. Camping here or rolling out a Bivvy Bag may be an option if it’s late enough. It’s best to push on though into Section 8, up the steps to Shek O road and then beyond and up over the Dragon’s Back. Rated 3 stars for difficulty and voted one of Asia’s best urban hikes you will scoff at both, it’s neither impressive nor particularly difficult, especially if you compare it to the 3 stars of Lantau Peak, Pat Sin Leng and Cloudy Hill on the Wilson Trail or Sections 3 and 4 of the Maclehose. It doesn’t even come close. Perhaps the difficulty rating lies on the fact that the latter stage of the Dragon’s Back is a boring slog around a dis-interesting concrete path, you’ll most likely be limping from the blisters, cursing the whole damn thing and counting down the marker posts, the distance between which seems to be increasing all the time. But finally it is down and down to Big Wave Bay and kiss that H100 marker post. That’s no small feat you have just undertaken. You’ve just conquered the Hong Kong Trail. 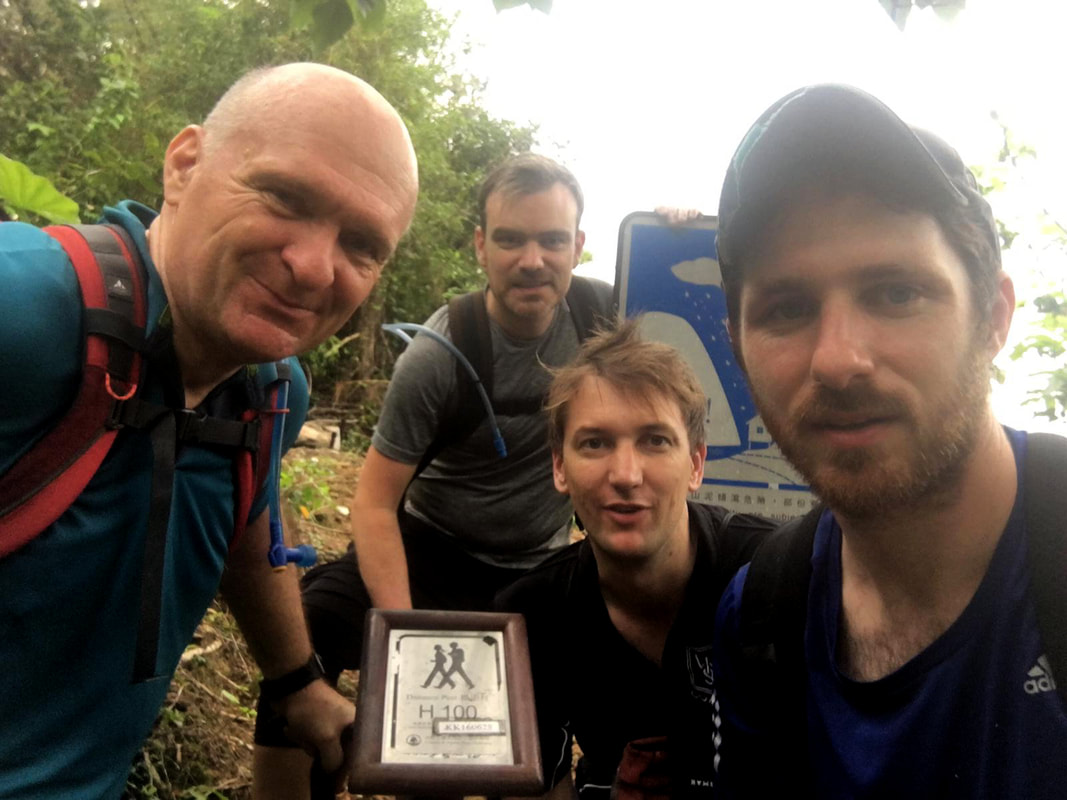