This is the Grandaddy of the Hong Kong hikes. An unforgiving 100km hike up and down some of Hong Kong’s highest peaks and through it’s most stunning landscapes. Beautiful beaches and coastlines, urban views over Kowloon, ridges, peaks, forests, jungles, reservoirs, grassland, monkeys, this hike has the lot. It’s not to be taken lightly though, you’ll be covering over 7000m in elevation gain, that’s close to hiking sea level to the summit of Mount Everest. It’s recommended you take this one east to west from marker M001 in Sai Kung to M200 in Tuen Mun, although we met others on the trail happy enough doing it in the opposite direction. We did this in one night and four days although 3 days is achievable for the super fit. 6-7 days would offer a more leisurely walk although bear in mind, the longer you take, the heavier your pack. That’s your conundrum right there, a balance will always have to be struck. 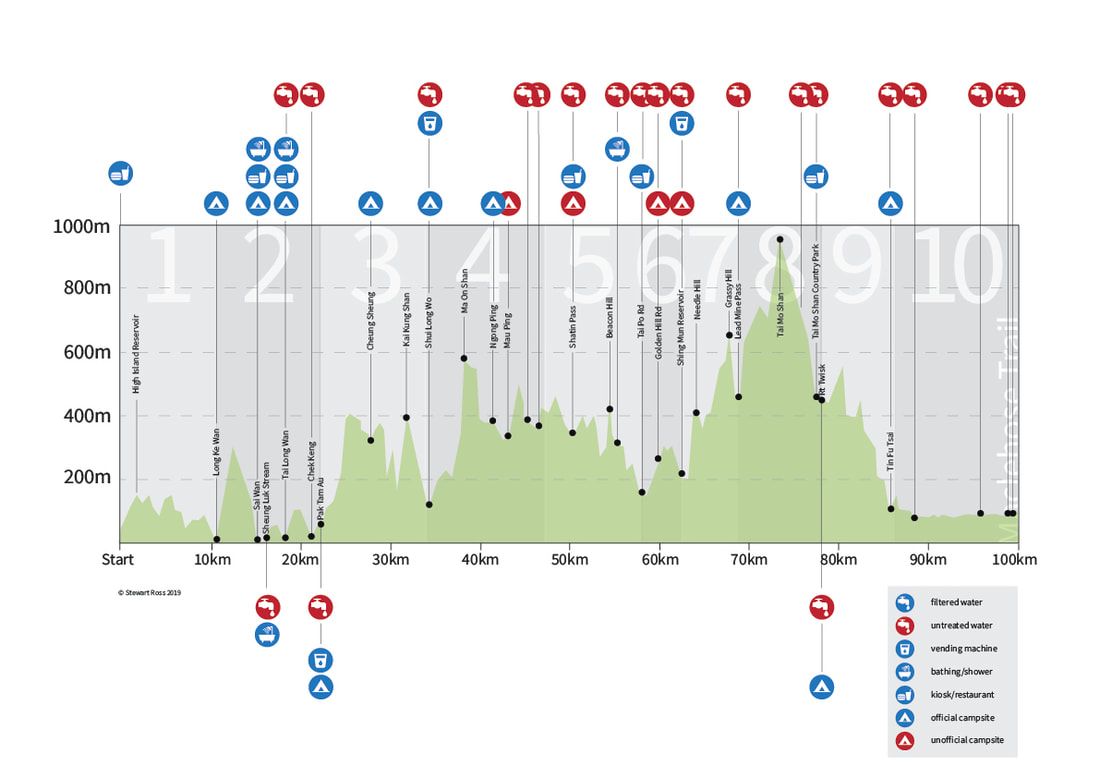 Night 1. Pak Tam Chung to Long Ke Wan. Section 1.
10.6 km
Dinner in Sai Kung, bus to Pak Tam Chung, on with the head torch and it’s a 3 hour 10km night hike along the reservoir to Long Ke Wan beach. Get this one cleared and you are well on your way. If you are starting in the morning you could clear sections 1 and 2 easily with a hike all the way to Pak Tam Au and camp there. Be aware though, sections 3 and 4 (both three star difficulty) are the toughest of the lot and I wouldn’t fancy those two in one day. Best to try and break them up in my opinion. 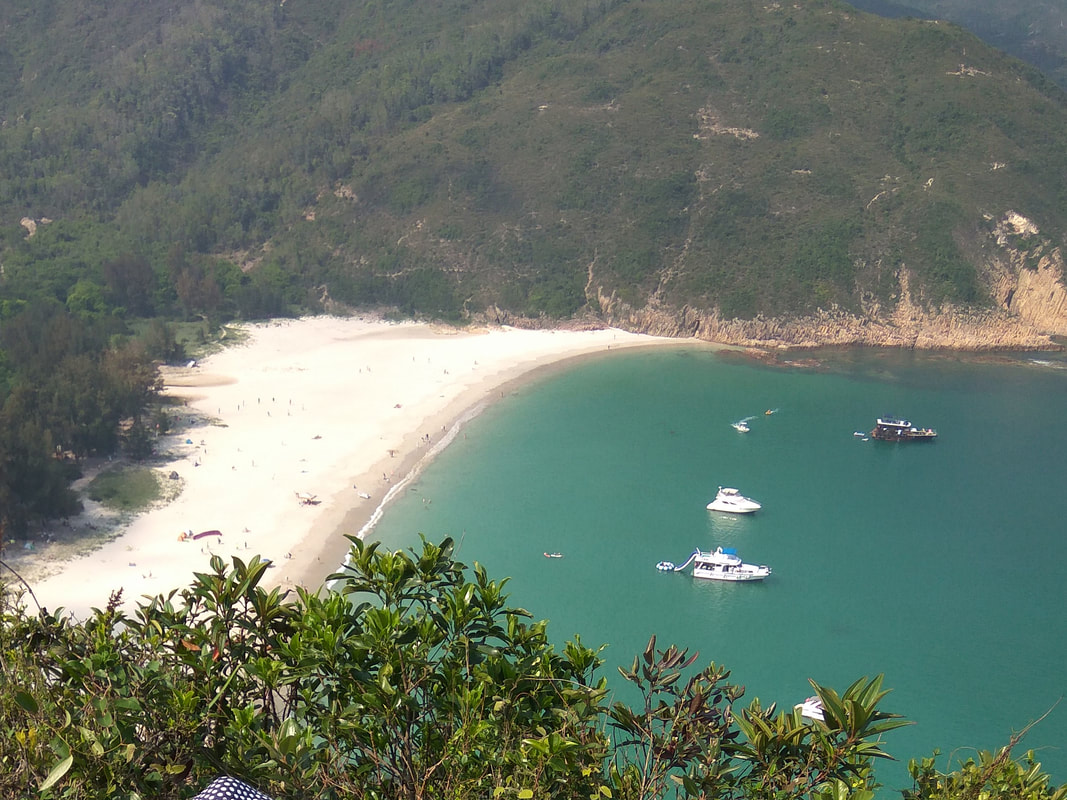 Long Ke Wan.
Day 1. Long Ke Wan to Shui Long Wo. Sections 2 and 3.
23.7 km
Long Ke Wan is one of my favourite beaches in Hong Kong and a cracker to wake up to under the shade of the trees on the beach. A quick swim in the sea and breakfast will see you on your way. Expect a decent hike on Section 2, it’s relatively hard and a swim at the waterfalls in Sai Wan may be just what the doctor ordered. The waterfall is a little off the trail though, to the left before you cross the small bridge after Sai Wan beach. I would leave your pack under a tree before ascending to the waterfall. Cross over the headland to Tai Long Wan and noodles can be had at one of the restaurants by the beach here. It’s a bit pricey but the food is pretty good. Walk up and over then it’s easy going to Pak Tam Au. Fill your water at the public toilets here as there isn’t much for a while. Get a good rest and grab a fizzy juice from the vending machine, you’ll need it before attempting Section 3. This one goes up and up and up. Then when you think you’ve reached the top it goes up again. When you’ve finally made it down to the end of Section 3, grab another fizzy juice at the vending machine by the toilets, you’ve certainly deserved it. Cross the main road and walk up the small path and road to the campsite. You’ll pass a tap on the left before the helipad by the road. Make sure you fill your water here otherwise you’ll need to walk back down from Shui Long Wo campsite to get some. 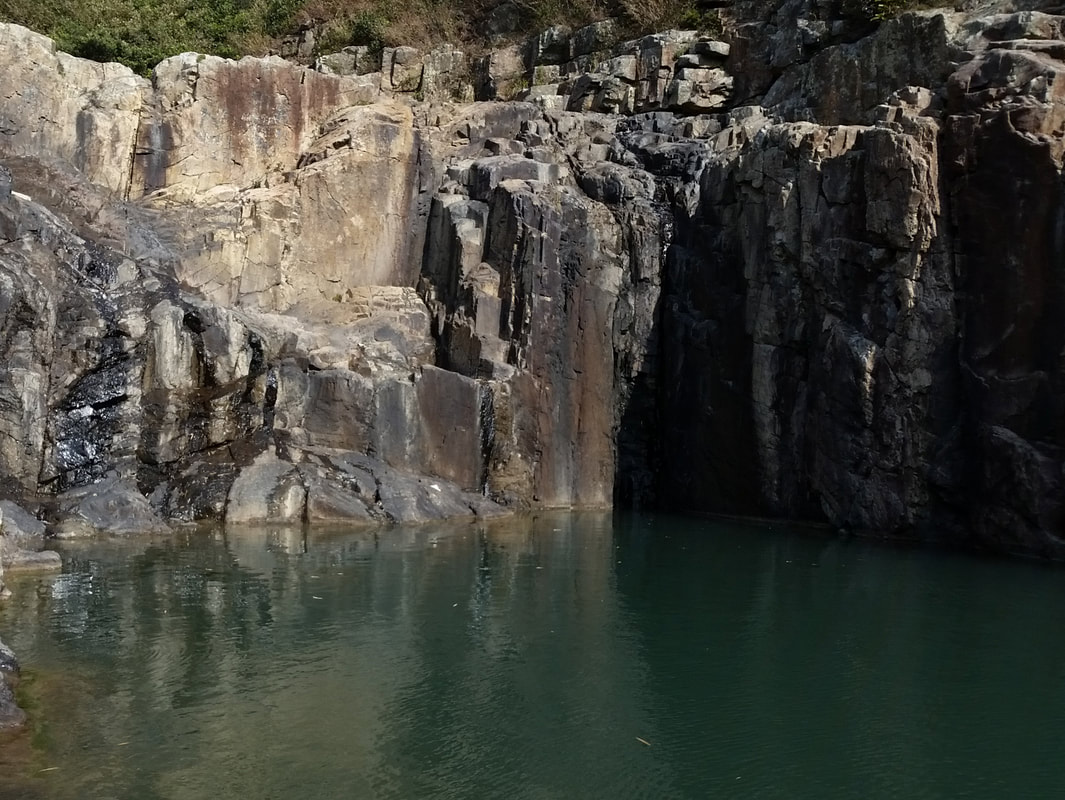 Rock Pool with non-existent waterfall near Sai Wan. Usually this is gushing but it was the dry season.
Day 2. Shui Long Wo to Shing Mun. Sections 4, 5 and 6.
28.1 km
This is a tough number straight off the bat. You’ll climb up the beautiful and rugged Ma On Shan on Section 4, just skirting the peak. If you decided to start during the day on Section 1 then Ngong Ping campsite is an interesting option to stay at at the end of day 2. Otherwise carry on past Ngong Ping along some other peaks including Buffalo Hill and Pyramid Hill. There are some great views of East Kowloon on this section. Carry on into Section 5 which starts off along a paved road with good views over the city. Make sure you have a look for marker M100. That’s your half way marker. It may be psychologically tough at this stage to know you are only half way through this but believe me, the toughest is behind you. There is a kiosk before Lion Rock Country Park, good for a rest and a snack. If you have had enough at this stage then there is a decent BBQ site to camp unofficially less than a km north on the road behind the kiosk, otherwise fill your water up at the public toilets then it’s up again into Lion Rock Country Park. You'll skirt Lion Rock itself and up again over Beacon Hill which by this stage will no doubt sap the soul right out of you. Don’t worry though, there’s a cheeky wee man-made bath off the trail on the way down from Beacon Hill. Look for the Maclehose logo (man hiking with rucksack) on the left just after you cross the road back onto the path. There is an indistinct path to the left which leads down to a stream. Listen carefully, you can hear the stream from the trail. This is a great, if slightly odd place for a refreshing dip, a scrub and to wash your clothes. Definitely worth a look if you can find it. ​ 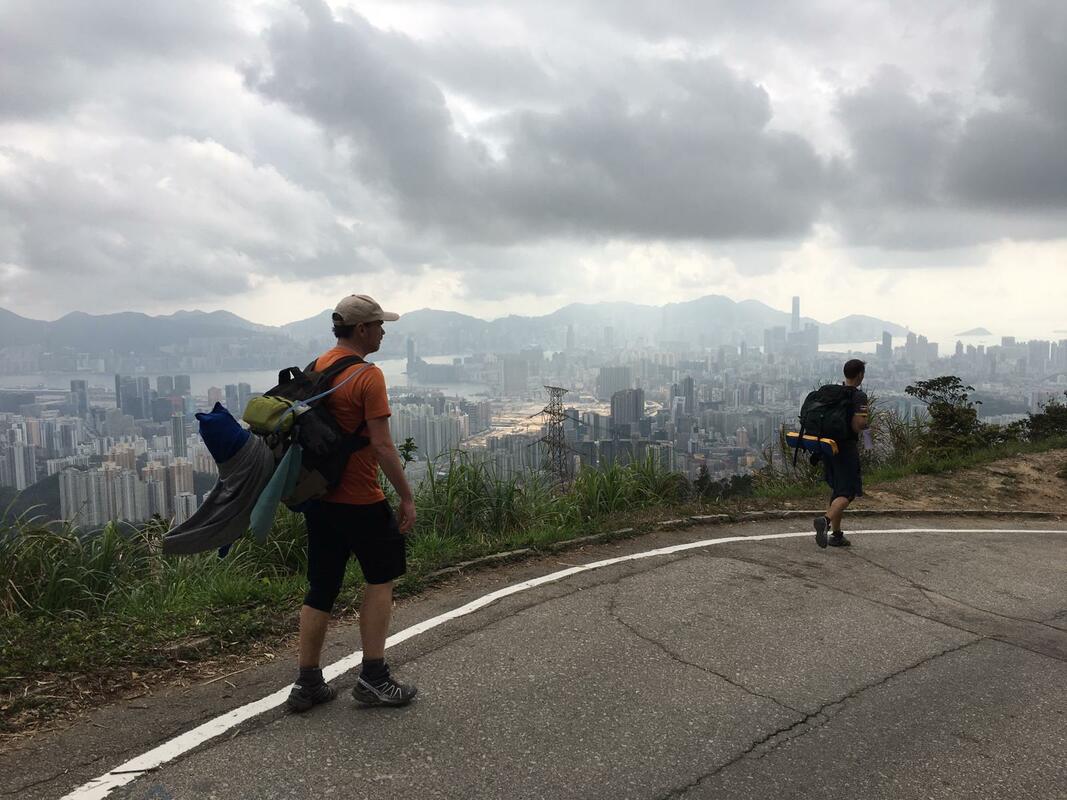 Views over East Kowloon at the start of Section 5.
Carry on down to Tai Po road and cross the road onto Section 6. There are lots of monkeys around here and they are aggressive if they catch a smell of any food at all so this is no place to stop for a snack. There are a few BBQ sites along Golden Hill Road which may serve as a campsite and we met some Mainlanders that were doing just that. My recommendation however, is to clear Section 6 to Shing Mun, taking in the night views of West Kowloon and Tsuen Wan on your way, fill your water at the large BBQ site at the toilets at the end of Section 6, pick up a fizzy juice from the vending machines then carry along a short distance along Section 7 to the dam. Just before you cross the dam, carry on a little and there is a BBQ area where the Maclehose Trail meets the Wilson Trail. Go up the steps to your right one level to
Day 3. Shing Mun to Tin Fu Tsai. Sections 7, 8 and 9.
22 km
Waking up looking over the dam is a real treat. Drink it in, for you are in for a brute of a climb up Needle Hill at the start of Section 7 after the dam. Needle Hill doesn’t look pretty on the elevation profile, and it lives up to its name. It’s a short sharp shock, but the views from the top are incredible. Section 7 is rated as a two star difficulty but you’ll be shaking your head at this in disbelief, it’s more of a low three in my opinion. ​Before you embark on section 7, ensure you have full water as there is nothing until Lead Mine Pass. There is a country park hut before the dam with a path that leads down to the reservoir. You can fill here to avoid having to walk back to the toilets at the large BBQ site.
Down from Needle Hill and it’s a long steep concrete road up Grassy Hill and down to Lead Mine Pass at the end of Section 7. Lead Mine Pass seems like a decent campsite, although I’ve never stayed there, a good place nevertheless to stop for a snack and fill your water before ascending Tai Mo Shan, Hong Kong’s highest mountain on Section 8. This sounds like a big deal, but this Section is rated as two star difficulty and it’s really not that bad. You are ascending to around 900 metres from 400 metres up, so this is a climb of around 500 metres. You can camp at the official campsite at Twisk at the bottom of the road leading from Tai Mo Shan, however a far more delightful option is to wild camp near the fire lookout spot near the summit. There are lots of pitches to choose from here, a reliable stream to refill water and quite an incredible view over Tsuen Wan, West Kowloon and HK Island. Check out this video for more information. Down from Tai Mo Shan is a rather boring affair along a winding concreted road with a pipe coming off the mountain to replenish water if you need it but it’s not long to the country park entrance where, with some processed Siu Mai at the kiosk you will celebrate the fact that you have no more significant elevation to deal with for the rest of this hike. If you are finished for the day, you could do worse than stay at Twisk campsite across the road at Rt Twisk, but if you have something left in you, carry on and clear Section 9 and stay at Tin Fu Tsai campsite, a far more agreeable, quiet campsite in the middle of nowhere with a nice stream to have a wash and fill up your water. It’s at the end of Section 9 and as a bonus there are no boy racers on Rt Twisk to wake you up in the middle of the night.
Day 4. Tin Fu Tsai to Tuen Mun. Section 10.
15.6km
This is an easy, flat, shortish hike out. Mostly along catchwater. There are a few places to fill up your water along the way on the catchwater but you shouldn’t need it as this section is not strenuous. Carry along the catchwater for what seems like ever as you count down the marker posts to M200. Make sure you kiss that bad boy marker post when you finish. That’s your trophy right there. If you are proper mental and have some time to spare, why not climb Castle Peak too? It’s only 600 metres straight up some steps. I wouldn’t though, not a chance, not after that hike. That was brutal. 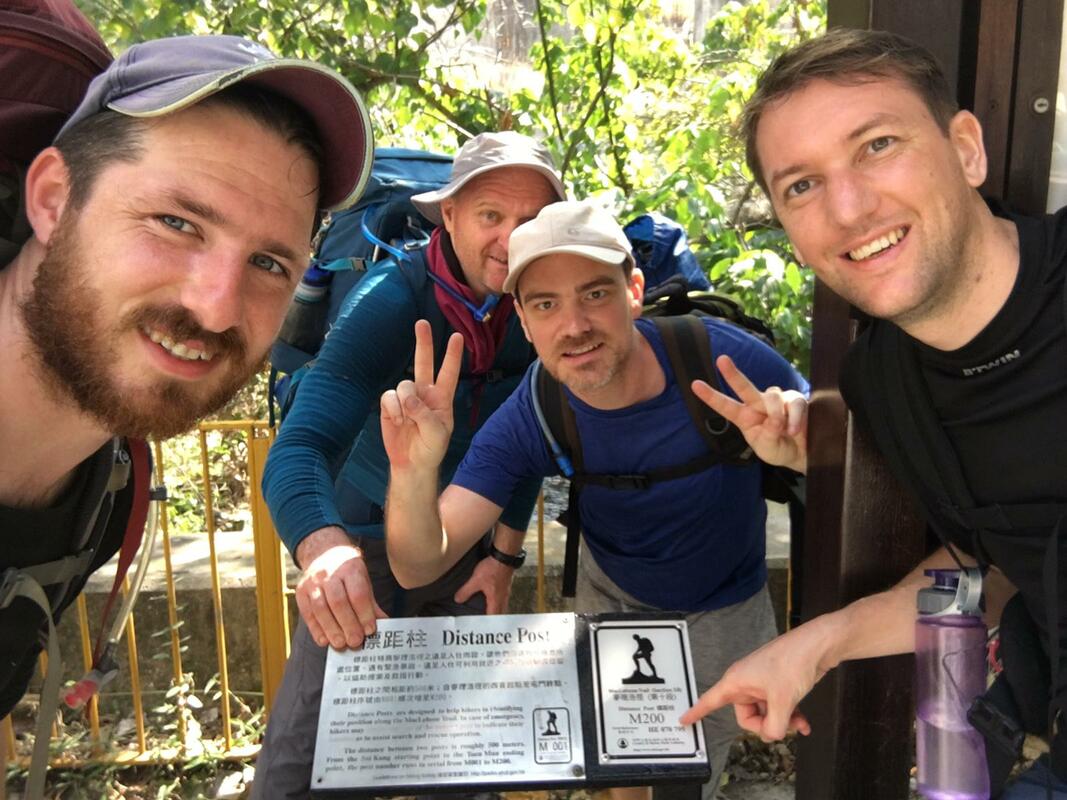