A game of two halves, the Lantau trail is a 70km loop beginning and ending in Mui Wo. The trail is split into twelve sections, the first half of which will see you climb Sunset Peak and Lantau Peak, Hong Kong’s second and third highest mountains and along mountain ridges before down to the coast. The second half is much easier, with some particularly beautiful farmlands and Sai Kung-esque coastlines and beaches before your final ascent over Tai Ngau Wu and back down to Mui Wo. There are plenty of options for camping on this trail, however there are some periods where you may well have to go rogue. The total elevation gain for the Lantau is around 3500 metres. 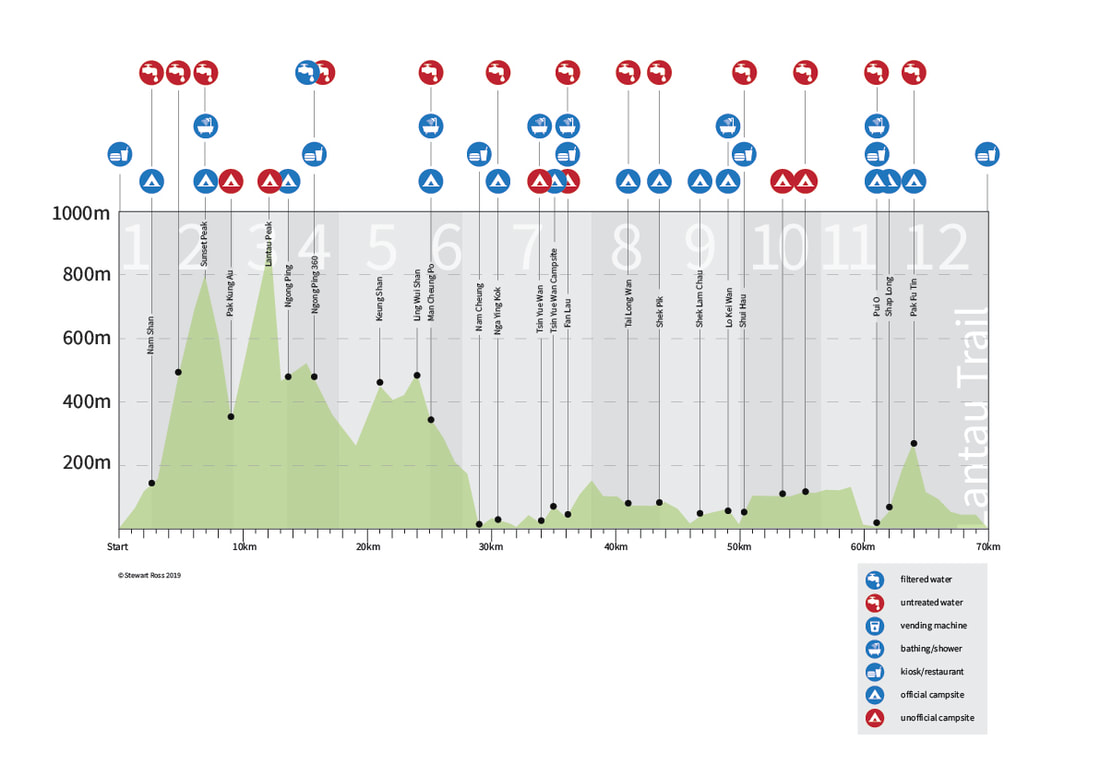 Day 1. Mui Wo to Ngong Ping. Sections 1, 2 and 3.
13.5 km
​There aren’t many that will attempt to climb Sunset Peak and Lantau Peak in one day (and certainly not from sea-level with several kilos on the back) but this is what most itineraries for this thru-hike will require. Splitting the peaks is possible as you can camp officially at the top of Sunset Peak, a beautifully bleak experience, possibly at Pak Kung Au pagoda or a better off-trail option at the BBQ site across the road. It is also just about possible to wild camp at the top of Lantau Peak where there is a shelter hut with room for two people and just enough space on the peak for around two small tents (only an option however if you arrive at the peak late at night). My recommendation is to batter the two peaks in one day. You are looking at an elevation gain on these first three sections of around 1300 metres followed by a steep descent down from Lantau Peak to Ngong Ping campsite which is hard on the knees. Water is scarce between Sunset Peak and Ngong Ping so fill up at the stream on the way up Sunset Peak or at the well near the top. You will be destroyed at the end of this first day but you will be glad to have cleared those two peaks. Don’t celebrate yet though, there is some serious elevation to come. 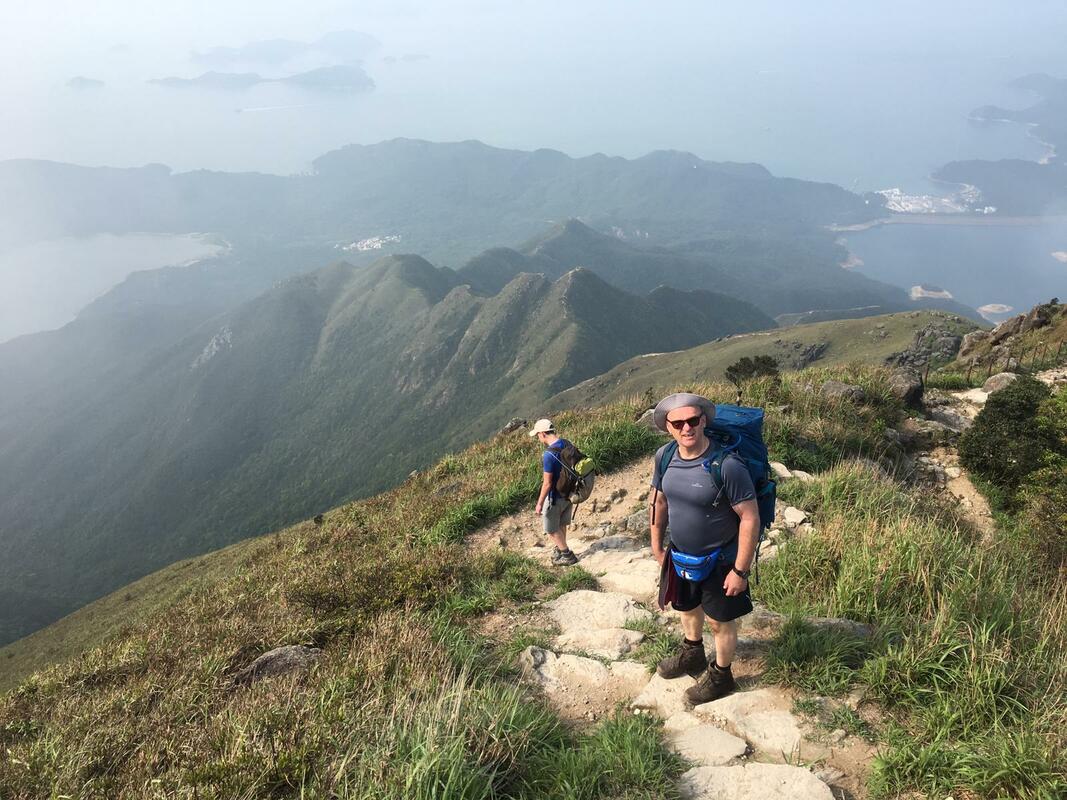 On the way down from Lantau peak.
Day 2. Ngong Ping to Fan Lau. Sections 4, 5, 6 and 7.
22km.
This is a tough part of the Lantau Trail however it is possible to plan in restaurant stops for breakfast, lunch and dinner which will bring your pack weight down considerably. It’s a short walk from Ngong Ping campsite to Ngong Ping 360 so this may be an option for breakfast and a coffee at Starbucks or one of the other restaurants or kiosks around the piazza. Most of these won’t open until 9 or 10 am so if you want to get going early then you should cook breakfast at the campsite. Sections 4 and 5 from Ngong Ping 360 to Man Cheung Po is dry so it is essential that you fill your water up at Ngong Ping 360, either at the public toilets or there is filtered water available by the monastery kiosk at the east end of the piazza. Walk down from Ngong Ping 360 to Keng Shan road, cross the road then it’s a tough climb at the beginning of Section 5 up to Keung Shan at 459 metres the along a ridge and up Ling Wui Shan at 490 metres. This section is exposed and steep and if you didn’t fill up your water you may well be regretting it and looking for an escape route out of there before you get heatstroke. There are none though so you’ll have to carry on to Man Cheung Po and it is here finally that you will find some water in a stream that serves the campsite. Slightly further down the stream you will find a small rock pool which is an excellent opportunity for a refreshing bath. ​
Man Cheung Po is a fantastic campsite, perhaps one of the finest AFCD campsites in Hong Kong. The relaxing top pitch faces a monastery in the mountains, and the stream will give you water all year round. If you are aiming to complete this trail in over 4 days then it’s a good option for a stopover, otherwise unfortunately it lies a little too early on the trail for those aiming to complete in 4 days or under. If this is the case then carry on down to Nam Cheung, a small village opposite Tai O. There are a couple of noodle places here to stop for lunch before carrying on round the coast. You will pass Nga Ying Kok campsite on your left, it’s small and likely to be full due to its location next to the trail. It’s not a great option so skip it unless you are desperate. Carry along through Yi O and it’s arable farmlands and rice paddies then over to Tsin Yue Wan. This is a nice beach with shade and possible to camp on unofficially, however I didn’t see any water sources nearby. Another alternative is the desolate Tsin Yue Wan campsite just up from the beach. There is a seasonal water source here. My recommendation however is to carry on to Fan Lau. Fan Lau is a remote peninsula at the far SW corner of Lantau with two beaches either side of an interesting semi-abandoned village. You can camp unofficially on Fan Lau Sai Wan beach to the west with public toilets nearby for a water source. It’s unlikely you will be moved on, however if you are there is a second unofficial beach for camping at Fan Lau Tung Wan off the trail to the east. Between these two beaches is Fan Lau village where there is a small noodle place not listed on google maps. Ask to sample the owner’s amazing home made chilli sauce and you can buy some too if you have room in your pack. I’m unsure what time this restaurant closes, so don’t rely on it for dinner.

Day 3. Fan Lau to Lantau Trail Section 10 BBQ site. Sections 8, 9 and part of 10.
16km
South west Lantau is a beautiful rugged part of Hong Kong with several campsites and quiet beaches along the way, many of which unfortunately are spoilt by the plastic waste washed up on their shores. This part of the trail is relatively quiet due to the only access points being several kilometres away in either Tai O to the north or Shek Pik to the north east. It is possible to hike this to the finish but it would be long. It’s also a difficult part of the trail for planning as there are quite a few camping options but these lie awkwardly early on this part of the trail if you are looking to complete in four days or under. My recommendation is to carry on beyond Shek Pik and complete Section 9 and a part of Section 10 and stay at a BBQ site on Section 10. Begin the day by walking the coastal route up from Fan Lau past Kau Ling Chung and Tai Long Wan camp sites. There are great views of the looming Lantau Peak and you’ll be amazed that you hiked this the day before (or camped at the peak like we did). This section is a very pleasant coastal walk with some catchwater sections finishing Section 8 by the reservoir at Shek Pik. There is a campsite here but I recommend refilling water at the public toilets and carrying on Section 9 over the dam and around the headland via the beach at Lo Kei Wan. This could be a nice spot for camping but if you want to bag a few more km, walk up into Shui Hau village, stopping for dinner and/or refreshments before filling up your water and carrying on for a part of Section 10.
Along Section 10 there are several BBQ sites next to the trail you can camp at unofficially, however I recommend pitching up at dusk and getting out early in the morning to avoid annoying anyone out for a run or walking the dogs. I recommend the BBQ site just after L104, or there is another BBQ site by a pagoda further along just after L113. This particular site was busy though when we passed by so the previous option may be safer. An alternative would be to carry on to Pui O campsite.
Day 4. Lantau Trail Section 10 BBQ site to Mui Wo. Sections 10, 11 and 12.
18.5 km
The hike to Pui O is easy and flat. Pui O is an obvious choice for camping, with a nice beach, kiosk, showers and restaurants nearby. I don’t recommend it as it sits a little too far forward on the trail for my liking. It is also extremely popular due to the good facilities and location off the main road and therefore can get extremely busy with families, locals and tourists. If this part of your thru-hike sits on a weekend or a public holiday I would think again about using this campsite, otherwise it’s a definite option for a little added comfort and relative luxury compared to your sleeping arrangements thus far. 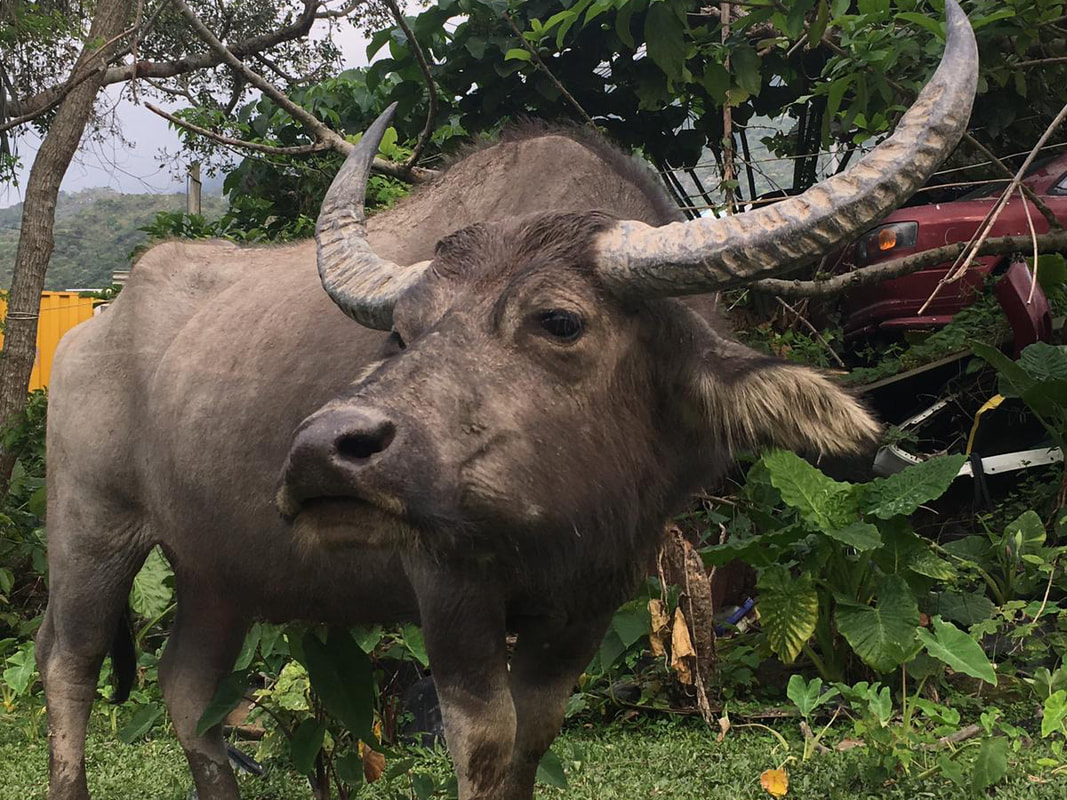 A water buffalo near Pui O.
Beyond Pui O lies a tough climb up Tai Ngau Wu. At 230 metres it’s not particularly high but it is steep and it comes at you out of nowhere to punch you clean in the face after two days of relatively easy hiking. You’ll feel good though as you reach the summit as this will be your final major climb on this trail. You’ll pass Pak Fu Tin campsite after the summit which is a very nice AFCD campsite and worth a look at some point, not on this thru-hike though as it sits far too forward on the trail to be an option. The campsite is served by a nice stream so if you have drained the last of your water ascending Tai Ngau Wu then it’s worth the short detour down into the campsite to fill up for the final few uneventful kilometres to Mui Wo. Get a photo at the green post box outside the ferry pier at Mui Wo, as this marks the official start and end point of this trail. You can celebrate in Mui Wo with some beer and a pub meal at the China Bear or alternatively reward yourself with a can from the 7-11 and a homemade pie from the place on Mui Wo Ferry Pier Rd near the HSBC. Either way, and with Lantau nailed, it’ll be like heaven. 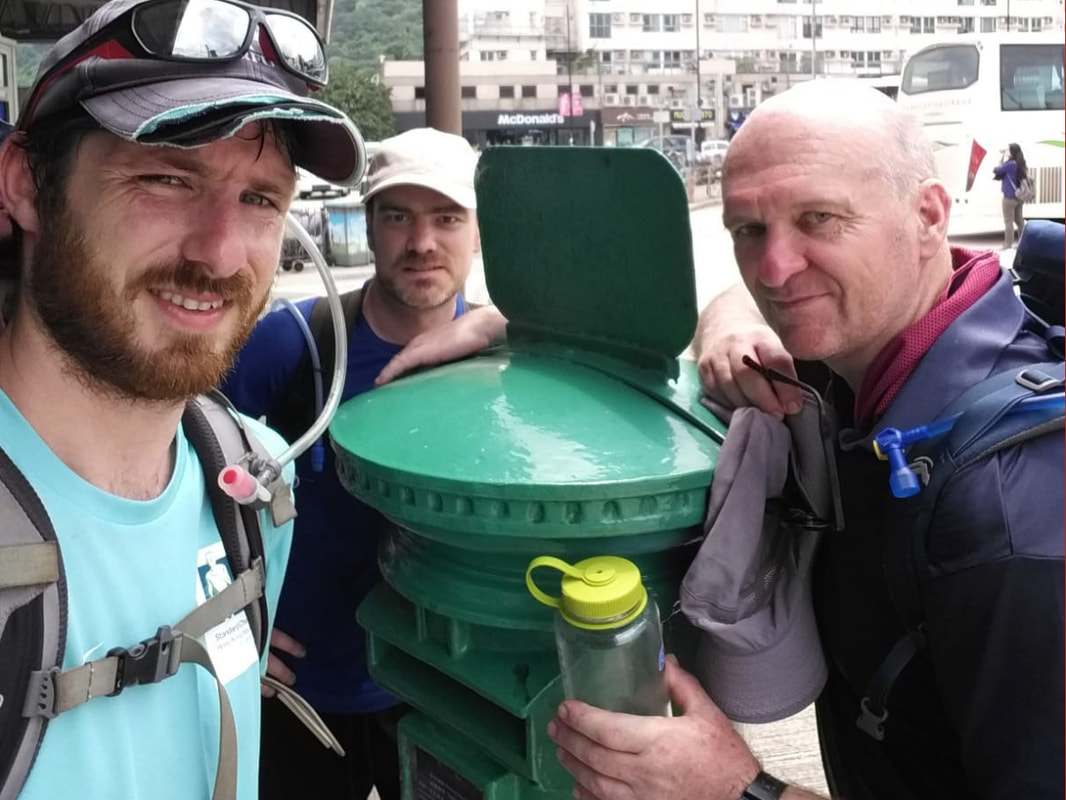